As of writing this post, my tweet total is sitting at 9,999 tweets. I wanted to do something special for my 10,000th tweet. It’s been sitting there for a couple of days while I’ve tossed around ideas in my head of what to do. What I’ve decided on is sharing the journey of my career for the last eight years, and highlighting what an unexpected impact it ultimately had on my personal life, as well as my career.

I’ll always remember Cathy Reaves, for several reasons. Wicked-smart Red Hat engineer from ask.com [at the time]. In 2009, we were taking one of the Install & Configure classes from VMware. She asked me if I was on Twitter.

She proceeded to explain to me what micro-blogging was. As an active blogger, it made no sense to me. I didn’t comprehend the difference. A blog is a blog. Why do I need this micro-blog?

Of course I signed up. And Cathy was the very first person I followed.

I’ve always been one of those early adopters of gadgets and technology and wanted to see what all the fuss was about. The next 5 years, and beyond, would redefine me professionally, unbeknownst to me at the time.

[Funny side story, Cathy went to work at Twitter not long after…]

One of the most interesting things that Twitter does for users is they keep the people you follow in chronological order. Scrolling all the way to the bottom of this list allows you to revisit who the first people you followed. 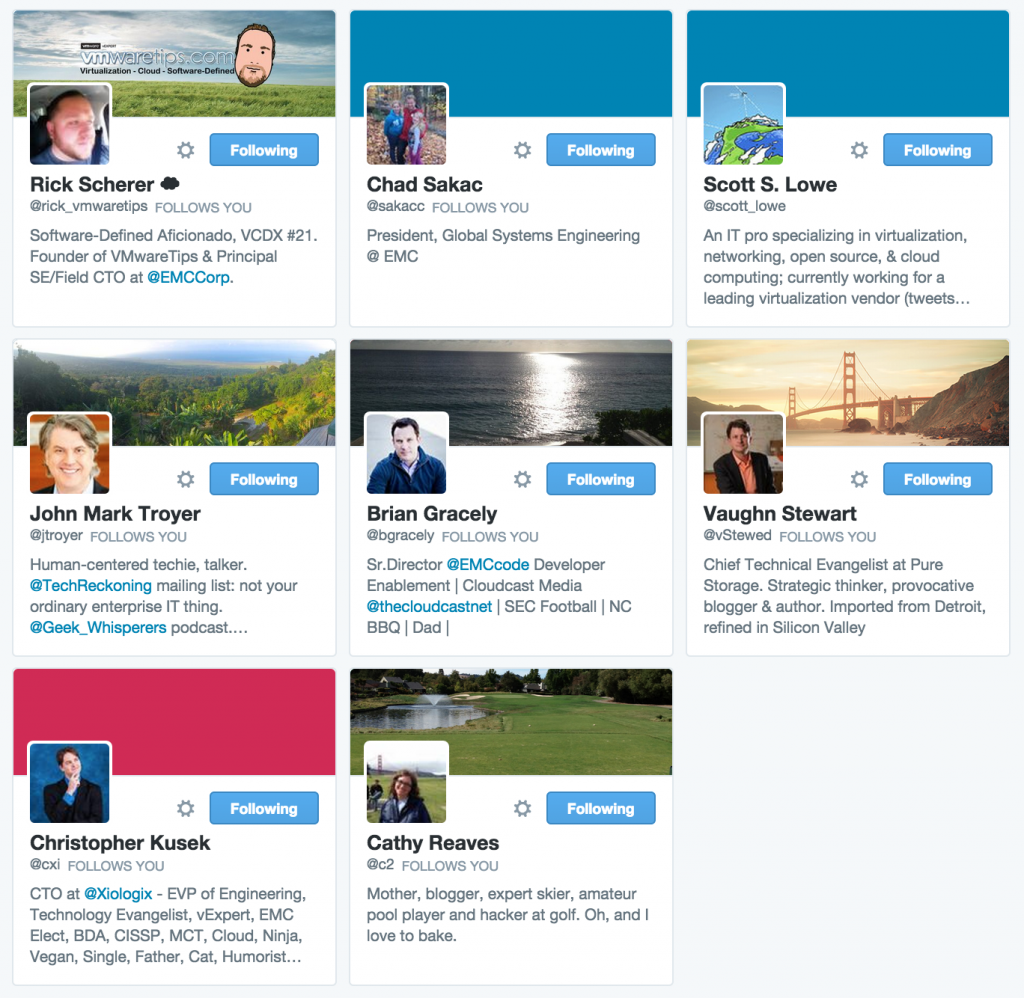 The people you follow tells an interesting tale of where you were at the time, as well as what you intended to use the platform.

At the time I was looking for information on VMware and found a lot of the “O.G.” bloggers writing about VMware content. As a NetApp/VMware customer, I was also looking for integrations between the two companies.

Within a year, I had built a small following, directly interacted with some of the industry heavyweights, and built relationships with people who would ultimately alter my career in a dramatic way. Me. Just another every day admin.

Access to people we wouldn’t normally have access to. In the beginning, this was one of the hipster-esque secrets about the platform. Now, it is an industry standard, and people look at you funny if you don’t have a twitter account. Regardless of whether people use the platform for building relationships with like-minded experts, furthering their career by joining communities, or cyber-stalking their favorite celebrities and athletes, it is useful and powerful.  Simple to use, and — years later — everywhere else on the web uses it as an authentication platform. It truly is fascinating just how ingrained it has become in our lives. Citizen journalism has also taken hold. Our major news networks now read tweets as if it’s news. But I digress…

Without Twitter, I would have never found the immense amount of bloggers I have read, followed, and formed working relationships with over the years. Thank you to all 100+ of you that I read weekly. Please never let the creative juices stop flowing.

Without Twitter, I would have never met John Troyer and become involved in the vExpert program, now entering my 6th year as part of the program. John, you will always be a mentor to me, and the “Godfather” to the vCommunity that you started, whether you want it or not. I look forward to seeing what you do at TechReckoning!

Without Twitter, I would likely have never met Vaughn Stewart, who ultimately was the reason I joined NetApp in 2011. Yes, Vaughn is at a competitor now, but without him, I never would have found my way to NetApp in 2010. Vaughn single-handedly guided me through the process, and reassured me when I was having my doubts. You all have him to thank for me being a hardcore NetApp’er.

The relationships I’ve formed online have led to offline friends in a very large circle. A brotherhood of sorts. Common people with common problems in a common industry, and it’s amazing how you simply connect in seconds when that happens. Even if you only see one another once per year at VMworld, and regardless of what company or vendor they work for, the community always transcends that.  It’s been interesting to watch our industry evolve around community, almost to where it’s force-fed to us from all vendors now.

And Twitter continues to be the platform-of-choice enabling this evolution.

The Four Tiers of Career Opportunity