Get Back to Work! 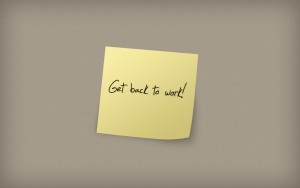 Welcome to 2016. Instead of a typical predictions post, I thought I would take a different approach this year. Namely, we’ve got a lot of work to do.

Technology continues to evolve at a breakneck pace. Couple that with a new generation of admins and engineers making their way into managing datacenters in 2016, with completely different priorities, and I think this is going to be one of the biggest driving forces in the next few years of innovation.

More and more, people just want infrastructure to get out of the way, and we’re seeing that manifest itself with more and more hyperconverged solutions. As I said in my 2015 Year in Review post, performance itself is on the verge of being commoditized, meaning that nobody is buying “slow” stuff anymore. With where the silicon and the networks and the magnetics are today, performance is almost not even an issue anymore, with the obvious exception of the most extreme corner cases.

Point is, we’ve got to take a fresh new approach at some of our design and configuration best practices.  The methods and designs for the infrastructure of the ’00s is no longer valid. We’ve got to take a big step back as architects and begin to appreciate and truly leverage what is available to us from the vendors of 2016 if we truly want to have our heads above water come IT 2020.

Has anyone else noticed that blogging has fallen off? I have.  And I’m guilty of it. When bloggers move into evangelist and OotCxO roles, and even Tech Mktg Engineers to an extent, they begin to move away from the technology “sticks” quite a bit. Scott Baker once dubbed this the “TME knobs/dials,” where you have two dials:  Technical and Marketing.  As a new TME comes in, they are likely 100% Technology and 0% Marketing. But as time goes on, the Technical gets dialed down and the Marketing gets dialed up. The magic sweet spot is a 50/50 of both, but this still leaves you at a bit of a disadvantage from a technical standpoint if you’re not touching the interfaces day-to-day.  I’m speaking from personal experience here, as I feel like I’ve landed on the 50/50 mark for several years now. Instead of certification classes, I’m taking Powerspeaking courses. Instead of running a lab environment, they’re now managing people and running a team.

Point is, the bloggers and “evangelists” of the VMware goldrush era for the most part have moved on, and are getting themselves into more and more leadership roles, away from the technology. We need to own the mentoring and the care-and-feeding of the next generation of content creators. We need to help guide them on the curating of their own community.

One of the additional trends I’ve noticed is that they’re hanging out in different places. Instead of talking config on the VMware community forums, they’re in a thread on a github project. They’re having meetups in their locale with 10-or-so like-minded individuals.

Basically, they’re building it how they see fit, and I’m calling ALL of my peers out when I say that we need to ENCOURAGE this and NURTURE this, regardless of whether you want to participate or not.  If you find yourself running of a team that wants to go to some meetups instead of the local VMUG, let them make that decision for themselves.

We built our own community in our own way. And I’m sure most of you remember having to fight for the validity of blogging and twitter ~10 years ago…

Now we need to let them (and help them!) do it their own way.  Blogging may or may not be a part of that. Podcasting and Periscope very well might be.

Without this turning into a geo-political discussion, we as a society have got to figure out how to simply be good to one another. Ten years of YouTube comments, elitist non-fact-based commentary on Facebook, and other various “hater” citizen click-baited journalism steeped in controversy regardless of truth has driven us here.

At the tail end of his literal destruction of a Star Wars review on Huffington Post, Matt Granger said this…

We are very close to reaching the end of social media’s usefulness. Anyone with a keyboard can write anything they want with little to no training or skill. More often than not, the articles don’t even need to be true or have any sort of back up research and sadly all it takes is a bold, contrarian statement to convince people who aren’t interested in doing research for themselves that something wildly incorrect is truth. This extends from simple movie reviews to horrifying humanitarian crises. Actual news has become a rare commodity and we are little more than targets for advertising and electoral votes. We are being fed stupid disinformation and tricked into thinking we have knowledge that we don’t actually have.

…and I could not agree with him more. The industry has cashed-in on the “27 things you must know about XYZ” click-baiting headlines that are driving ad sales, but that is short-term. And it has had some amazing negative side-effects to people and the way they interact with people.

Bullying is more rampant than ever.  I was never bullied in school, but the last 10 years have seen the anonymity breed a serious group of haters around any viewpoint that is posited, true or not.  Go and read any comment thread from any brand Facebook page.  But you likely don’t need to. You likely already know exactly what I’m referring to and are sitting there nodding your head.

2016 is an election year. Do yourself a favor and unplug from the news. All of it. If you haven’t learned by now that they’re private companies saying whatever they want to drive up ratings in order to sell ad slots…. well, you do now.

Do your own research. Educate yourself on issues, candidates, and agendas. Look into who they’re in cahoots with, who their funding comes from. Get out there and vote. Don’t be influenced by others’ opinions. Make your own decision.

As an industry, as a community, as a society, and as a nation… What Are We Up to at DatacenterDude.com?
Subscribe
0 Comments
Inline Feedbacks
View all comments
My Kit.co