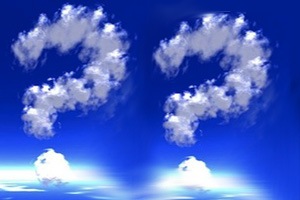 Cloud designs and architectures introduce many interesting topics of discussion when meeting with customers revolving around how they currently do things, as well as how we’re going to be doing things 5 years from now.  How they should design their storage infrastructure, how the storage infrastructure integrates seamlessly with the next level of abstracted infrastructure, and backup.  You can’t have a discussion around storage architectures [typically] without backup being mentioned or expressed as a concern.

So let’s talk about backup.

Did you just cringe a little?  Yea…me too.

This isn’t going to be talking about backup in the traditional sense of the word.  I want to bring to light NetApp’s next-generation framework that we’re architecting specifically for cloud deployments, with ITaaS, vCloud Director, and Service Provider deployments in mind.  To have this discussion, we’re going to need to set the stage, and discuss where we currently are today, even in the best case scenarios.  I’m going to use an example of what we’re seeing current NetApp customers do today, as well as refer to the few tape fanboys that won’t let go of their precious LTO drives.  Yes, we know that demand is still out there.

Let’s start with a typical “Best case scenario” of what we see out there today.  Separate datacenters, active cross-site mirroring going on between these datacenters (sometimes for DR, sometimes for shared infrastructure), vaulting of backups to a lower tier of disks or a long-term storage “dumping ground,” as I like to refer to it, and yes, a lot of times, there are large tape libraries plugged into the back of the controllers sucking data off to tape to be sent out to Iron Mountain, or the like.

Why won’t this work for cloud?

Cloud implies the use of Service Levels, Chargeback, and what I’ll refer to as “invisible provisioning.”  This has no exposure to the VM/App owner in ITaaS environments, or to the customer in Service Provider environments.  All they know is what they are being sold in compute/memory/storage, and what service level they have selected for a particular vDatacenter that they’ve purchased. They know that by paying for GOLD service level, they are getting multiple hourly snapshots, daily snapshots, and DR to off-site, etc.  SILVER might only get once-daily snapshots and off-site replication, and BRONZE might just get nightly snapshots, even weekly or monthly perhaps.   Tenants in a cloud environment, whether they’re internal ITaaS app owners or external SP customers, are not running their own backups.  Let me rephrase that.  Tenants in a cloud environment should not be running their own backups.  There’s nothing saying they can’t, but they should be leveraging the Provider to handle this for them.

Let’s start with a definition…

SnapCreator is a Backup Plugin framework for integrating virtually any application with NetApp snapshot technology.

Keyword: Framework.  This is not a backup application.  At NetApp, we see that even traditional backup means and methods need abstraction when you’re going to a Cloud Provider or ITaaS scenario.  By removing this responsibility from the tenant, you get to standardize ALL tenants on a single, simple, vm- or application-consistent backup architecture, across your entire vCloud organization.  SnapCreator does not handle directly talking to applications such as Oracle to achieve application consistency; instead you can tell SnapCreator to call an application backup modules, or “plugin.”  Most applications should be quiesced before a snapshot is taken to ensure the snapshot taken is consistent with the application itself.

And don’t think for a second we’re only hitting the low-hanging fruit.

All of these already have supported modules/plugins into SnapCreator.  We understand there are many more applications that potentially will need to be backed up in cloud architectures, but this is where we’ve started, and development continues.  If you’re currently using one of our SnapManager products, this framework will not necessarily replace that, but rather give you an alternative means of backup in Cloud environments such as vCloud Director.

This is just one of the many reasons you should be considering NetApp for hosting your vCloud deployments.

Have any questions?   Post them up in the comments and let’s discuss, or hit me up on twitter.